For anyone that has not heard of Wim Hof or his famous breathing technique, then it is probably time that you were introduced.

‘Iceman’ Wim Hof is known for his ability to turn from normal human to superhuman just by the control and changing of his breath. As a result, Wim has completed extraordinary feats including climbing Mount Everest in just his shorts, swimming underneath ice for 66 metres and doing a half marathon above the Arctic circle – also just in his shorts.

Whilst many consider him to be a freak of nature, which he kind of is I suppose (but in the best kind of way), he puts his achievements down to his breathing technique which results in him being able to regulate his body temperature in extreme conditions and maintain a stable internal environment. That’s not even the craziest part. The craziest part is that he believes that you can also learn to control your own body and mind through the breath by learning the method for yourself.

In a very rough summary, the method involves 40 or so breaths of big inhales and shorter exhales. On the final exhale, you hold your breath for as long as you can. Repeat 3 times.

Before trying it out for yourself, you should check out the full details on Wim’s official website. It contains more detailed information about the technique, how to incorporate the other aspects of the method and other valuable information.  For the full effects of the breathing exercises and to become as superhuman as Wim, you will also want to try and practice cold exposure and meditation – the aforementioned ‘other aspects’ of the method.

In this post though, rather than kicking the information about the technique to death (and with so many fantastic resources already out there for you), I am simply going to run you through the benefits – some scientific evidence and some anecdotal. And remember, these are just the benefits of the breathing pillar. The other two pillars, meditation and cold exposure, come with even more unique benefits that can be added to the list.

If you are going to try your hand at some cold exposure sometime soon, whether that be jumping in a cold shower this evening or climbing Everest, being able to regulate your body temperature to at least some degree is important so that you don’t freak out when the coldness touches your skin. For safety reasons, just make sure you jump in the shower AFTER finishing up with your breathing exercises.

A recent study was conducted which involved Wim getting into an MRI scanner and being exposed intermittently to cold. One time without any breathing or meditation applied, and the other time with.

The results were that without technique, Wim’s body temperature would ebb and flow with the cold exposure. Applying his method the second time around (marked by the stable red line) allowed him to maintain a steady temperature throughout. Crazy stuff.

Here is an addition from the Wim Hof Method website that further outlines what was going on:

Wim appears to activate regions in the periaqueductal gray; a part of the brain that is the primary control center for pain suppression. This is a promising discovery that could lead to a potential role for the WHM as endogenous painkiller, and reflects results we already see today in people who effectively use the WHM to combat conditions like fibromyalgia.

The results clearly demonstrate the capacity of certain regions of the brain to contribute substantial top-down regulation of the body’s response to averse environmental stimuli, upending the hitherto accepted theory that this function was almost exclusively reserved for peripherally-induced processes. As with most good studies, the answers have created many new questions. As such this serves as a solid basis for further research, which we hope will follow very soon.

There are two different scientific papers which show the Wim Hof Method to activate the sympathetic nervous system. One is titled ‘The Influence of Concentration/Meditation on Autonomic Nervous System Activity and the Innate Immune Response: A case study‘ and the other ‘Voluntary Activation of the Sympathetic Nervous System and Attenuation of the Innate Immune Response in humans.’

In our day-to-day lives, the sympathetic system can run constantly in the background if we are stressed since the body can’t differentiate very well between work-related stress and ‘I am about to be attacked and could die’ related stress. Therefore with the panic button jammed ‘on’ most of the time, we can find it difficult to switch to and use the rest and digest system effectively.

This breathing technique (as well as cold exposure) is your reset button. By consciously activating your sympathetic nervous system’s fight or flight response, it actually finds it much easier to return to normal after you’ve finished. Rather than being jammed in fight or flight mode, your body can finally switch to rest and recover.

It is fairly common knowledge that most ailments and illness that we experience begins with some sort of inflammation in the body.

What is not common knowledge is that implementing the Wim Hof Method into your life can actually reduce levels of inflammation. The study by PNAS (the same study from the last section) found the following:

Healthy volunteers practicing the learned techniques exhibited profound increases in the release of epinephrine, which in turn led to increased production of anti-inflammatory mediators and subsequent dampening of the pro-inflammatory cytokine response elicited by intravenous administration of bacterial endotoxin.

This study could have important implications for the treatment of a variety of conditions associated with excessive or persistent inflammation, especially autoimmune diseases in which therapies that antagonize pro-inflammatory cytokines have shown great benefit.”

Ongoing research is being carried out in the Netherlands at Radboud University Medical Center about the effects of the various components of the WHM on inflammation and pain – so be sure to keep an eye out for the latest discoveries!

Just practising long breath holds, even if you don’t intentionally set out to get this benefit, will mean that you can hold your breath for longer periods of time. Not only is this pretty cool in itself, but I have also found that breathing (or not breathing) comes a lot easier and natural in situations where it needs to be, such as in sport.

Breath holding also produces heat in the body for some reason that we don’t really know. But this means that you can stay longer in an ice bath or a cold shower and have more of a chance of producing the feel-good hormones like dopamine and serotonin and reap all of the benefits that cold exposure brings.

Here are some of my breath holds after a Wim Hof breathing session. Lengths of time that I personally thought were impossible to achieve for a regular dude like me, but it only took about a week of daily Wim Hof Method to get to this point: 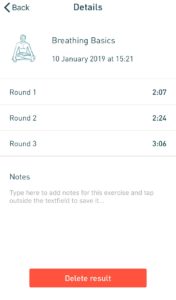 Increase blood flow to the brain

Normoxia refers to the normal levels of oxygen in the earth’s atmosphere. Hypoxia is the experience of levels below that.

As the Renegade Pharmacist points out:

The physiological explanation is as follows: The hyperventilation washes out carbon dioxide which at particular concentrations signals your brain to breathe. Once that is done, the breath can be held for a longer duration creating the right dose of intermittent hypoxia more effectively.

Initially you hyperoxygenate by breathing in more air that you breath out, then hold your breath after full expiration for as long you comfortably can. To complete the routine you take one big inhalation known as the recovery breath that resets you back to normoxia.

The retention on the inhalation at the end for 10-20 seconds, which resets the body back to normal, also creates an extra powerful surge of fresh O2 that now rushes into the tissue cells, especially the brain if you direct it in the right way!

You can also check out his very zen-like image of all of the benefits of intermittent hypoxia – all of which you get whilst doing this breathing technique. As Wim puts it himself: ‘Get high on your own supply!’

That just refers to breathing, kids.

The conscious, positive stress that you go through while doing the Wim Hof breathing, as well as the cold exposure, leads to the production of feel-good endorphins and hormones like adrenaline, dopamine and serotonin.

The hyper-oxygenation of the body during the big inhales followed by the re-distribution in the long breath hold creates a feeling of being high. Don’t believe me? Check out this guy’s rundown: