Get Better Sleep: The Pros and Cons of Each Sleeping Position8 min read

Before we even jump into the pros and cons of each sleeping position, it is seemingly obvious but also very important to highlight the fact that changing your sleeping position is quite difficult – but may well be very necessary.

Not in the sense that it is tough to move during the night. Everyone tosses and turns to find the right spot, but most people tend to have a default sleeping position. A go-to for when you really need to drift off. This is an aspect not really touched upon on my previous post on sleep.

The aim of this article is to tell you what’s good about your favourite sleeping position, and what isn’t so good about it. If you don’t like the cons that you see, then it is actually possible to train yourself to change your default sleeping position.

This is something that I am doing right now. My default position for getting some good shut-eye is either curled up like a baby on my side or edging on to my front. Something like what you can see below: 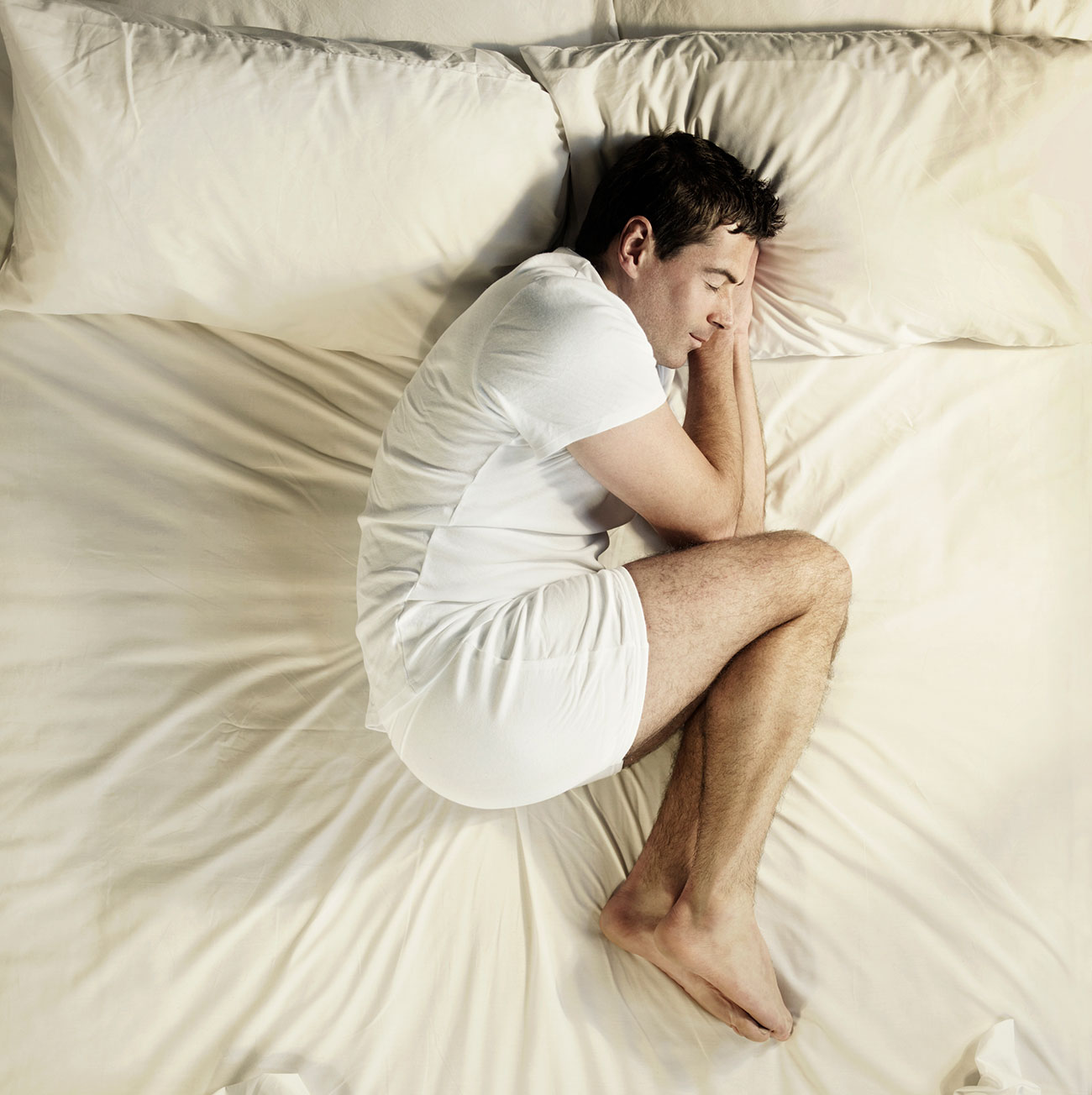 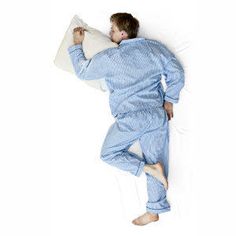 If you’re like me and these sexy positions look very familiar to you, then congratulations, you have the most common way of sleeping. Also congratulations on the fact that you probably experience some degree of neck, back or shoulder pain for sleeping this way most nights.

This is why day by day I am trying to get my body to learn to sleep on its back. Right now it is impossible but soon enough I hope to get there. Sleep expert Dr Peter Martone claims that it takes 2-3 months of practice to be able to change your default position, so I am going to give it a go and try and solve my neck pain in particular.

It doesn’t matter whether you want to change your sleeping position or not, it is useful to know what your way of sleeping is good for and what it is not good for. Then you can make your own decision from there.

I have also included some cheesy stock photos in case you forgot what each sleeping position looks like.

Sleeping on your back 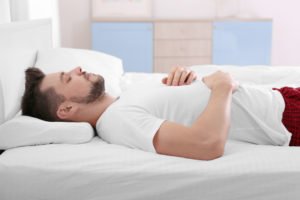 As mentioned before, the reason that I am trying to transition to being a back sleeper is due to the immense benefit to the neck and spine, things I have had plenty of issues with in the past.

Lying on your back, particularly with minimum amounts of pillows, helps to keep your head and spine in a neutral position. As Dr Peter also points out, many of us lose the important cervical curve in our neck from being hunched over in front of a computer or smartphone all day. If we aren’t sleeping on our backs at night, there is nothing to rebound it back into where it should be. 98% of his patients that have lost this cervical curve in their neck have developed an unnatural curve in their lower back. Not only is posture severely affected, but scoliosis is a common follow-up.

There is also a study claiming that sleeping on your back is the best way to stop the formation of wrinkles, so that’s nice to know too.

People who are prone to snoring and sleep apnea (where breathing stops for a moment during sleep) will have a near impossible time sleeping on the back as this is when the symptoms are most prominent. Back sleeping is the position that is most linked to breathing issues during the night too.

On another note, in one study, back sleeping provided the worst quality of sleep among subjects compared to the other two main types. So if you do suffer from poor sleep quality and tend to sleep on your back, this could be a factor. Of course, this is just one study and there are many people who get a great night sleep on their backs, including Dr Peter himself.

HOW TO TRANSITION TO BACK SLEEPING

If the listed cons aren’t causing you issues and you like the look of some of the pros, here are some of the methods that you can try in order to become a back sleeper. Most of these I am giving a go:

Sleeping on your side 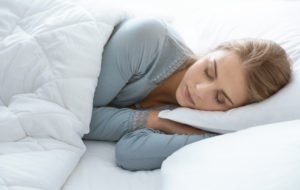 If you sleep on your side and are quite happy to continue to do so, then I am pleased to tell you that sleeping on your side does actually have some great benefits.

A couple of them ride off the cons of other sections. Sleeping on your side has been linked with getting better and deeper sleep as well as being a sort of ‘cure’ for people suffering from sleep apnea, snoring and breathing difficulties during sleep.

Some other studies about the benefits of sleeping on your side interestingly seem to focus on the immense benefits of sleeping on your left side in particular. There is an article that vouches for left-side sleeping in order to ease heartburn and acid reflux as well as another study which claims that left-side sleeping is great for expectant mothers. This is apparently due to increased circulation to the heart.

As I mentioned earlier, one of the cons that I have personally experienced is suffering from neck stiffness and pain and sometimes back pain too, especially after resting in the fetal position. This is on top of the loss of the cervical curve that was discussed in the back sleeping section.

Some of the other big cons of sleeping on your side include the very common loss of efficient blood flow and the not-so-pleasant pins and needles that come from putting your full body weight on just one limb – usually an unfortunate arm. Not only is this style of pins and needles uncomfortable, it might actually adversely affect your muscles and nerves if it happens on most nights.

HOW TO TRANSITION TO SIDE SLEEPING:

Like with back sleeping, if you like the idea of being a side sleeper and want to give the benefits a shot, then here are some methods that can help you become a side sleeper:

Former front sleepers: a pillow under your arm can A). help to simulate the feeling of being on your stomach and B). prevent you from rolling onto your stomach.

Former back sleepers: a heavy pillow placed behind your back will help to prevent you from rolling to your back. You can also try using a pair of pillows on either side of your body if you tend to roll from one side of your body to the other. Buckwheat and millet hull pillows will both work well — they’re heavy enough that they’ll stay put in your bed while you sleep.

Sleeping on your front 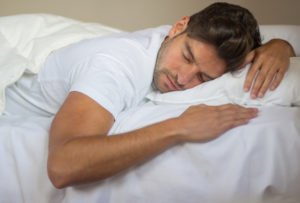 Compared to the other sleeping positions, sleeping on your front definitely has the least amount of benefits and the most amount of cons. If you mostly or exclusively sleep on your front, it might be time to start implementing some steps to change out of the habit.

Pretty much the only physiological benefit of sleeping on your front is that it is a good way to avoid snoring and sleep apnea. Apart from that, it is fairly detrimental.

Sleeping on your front flattens the natural curve of the spine which can cause back pain, particularly in the lower back. This is because when you sleep this way, most of the weight of your body is centred on your spine, rather than evenly distributed as it is in back and side sleeping.

Also, anyone that has ever managed to sleep the entire night on their front with their necked turned to the side (unless you sleep face-squashed against the bed) will tell you of the joys of neck pain come the morning.

HOW TO TRANSITION TO FRONT SLEEPING:

P.S. Don’t forget that you can also implement some of the room hacks that I have written about previously in order to get a great night sleep.