Do we really have multiple personalities?5 min read

This may seem like a very strange question to propose.

You may be on one end of the spectrum where you’re like of course not. I’m me, I’ve got one body, one brain so how could I have different personalities? It’s simple maths: 1 personality = 1 person. You say he or she’s got a great personality, not he or she’s got a few nice personalities. Or you may lie at the other end of the spectrum; of course, we have multiple personalities. How else would eating a whole tub of cookie dough ice cream feel so bad yet so good at the same time? Maybe you are in the camp of what the hell are you on about Dan. That’s fair enough too.

Well according to recent studies, especially in the fields of neuroscience, the cookie dough eater is, in fact, the one on to something. Multiple personalities is actually a real thing. Or more specifically: the modular mind. It explains that the mind is made up of various ‘modules’, a bit like different software or apps in your brain that are responsible for different actions and behaviours. It is sort of a Mr Jekyll and Dr Hyde scenario, but hopefully with less violence. You might want to think of it like the Pixar film Inside Out.

Image via: Reclaiming Your Future

This may seem a bit absurd, but it makes sense when you think about it. Almost every decision that we make is made up of an argument between 2 sides, often more, and we act according to who is the winner. Everyone is familiar with the debates with themselves in the shower about what awesome line could have been said in an argument. Or whether to hit the gym after or go back to bed. There is a constant and almost relentless debate in our heads all day long. Whichever ‘self’ has the most power/control at that time, is the one that we generally act upon.

So how on earth did we manage to acquire so many different ‘personalities’ and why do they hardly ever mingle together to make one, certain, rational decision that is the best for us? Well, the answer actually lies in how we developed through evolution. You see, the brain didn’t develop in a very straightforward fashion. Different modules evolved and would take control of your full self whenever necessary. Tasks such as seeking food, reproducing and fighting would all develop in different parts of the brain. However, despite all of these areas and becoming more refined over the years, they never really integrated with each other. Because of this, there is often a battle going on for control of you between all of your modules. A bit like it is illustrated in Tim Urban’s fantastic post on Why Procrastinators Procrastinate: 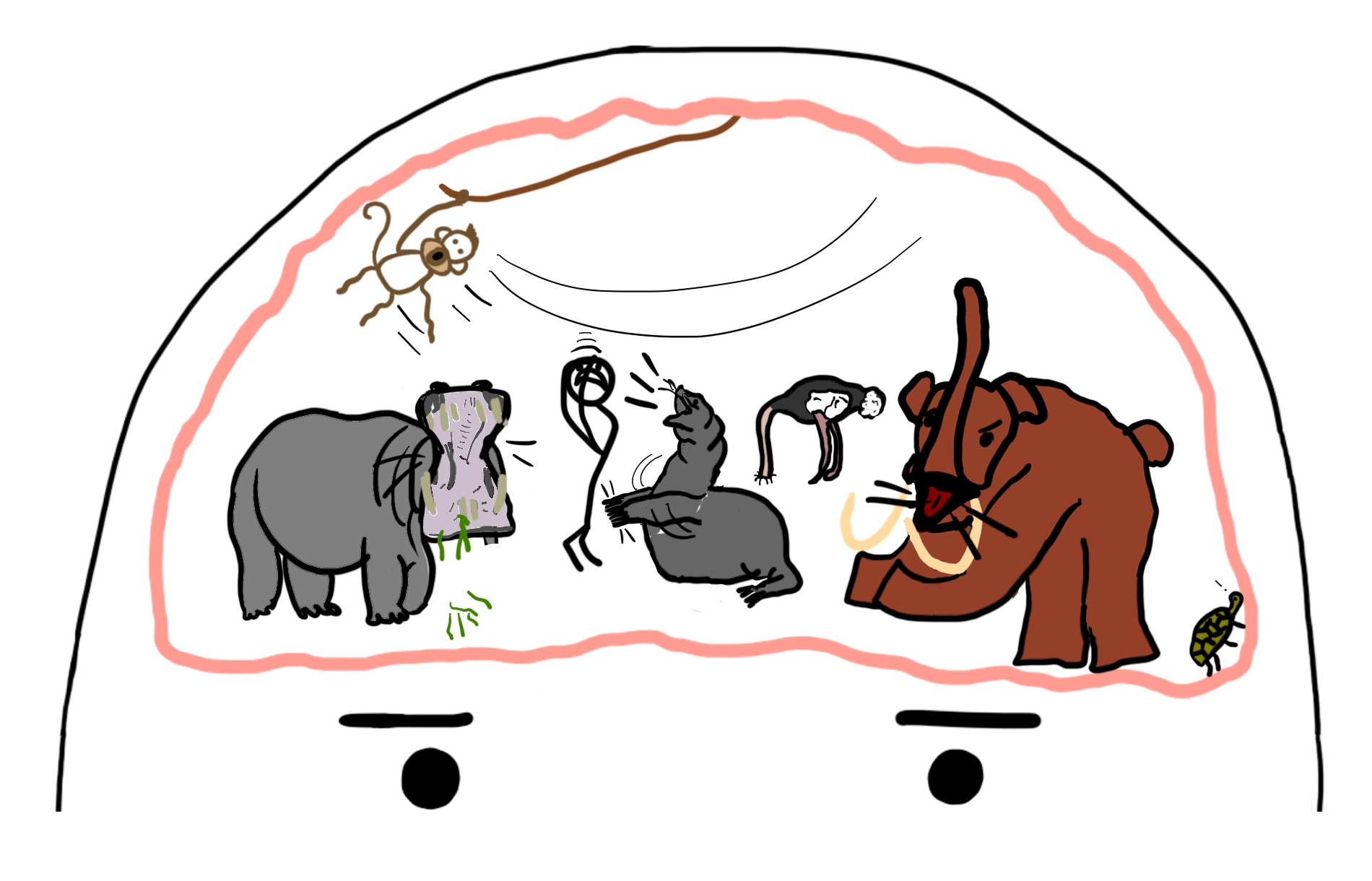 It can get messy in there sometimes.

This is when you realise that lacking self-control is actually lacking selves-control. That harmony is a lot harder to establish, so you can cut yourself a bit of slack. And with all of the animals (personalities) in there fighting for control, how can we possibly get them to behave and channel the right self at the right time?

Step one is probably to realise that whichever module has the most emotional kick attached to it at any point wins the competition to be “you.” This is a perfectly human response and why your rational module often scolds your reactionary module when say, you lash out in an argument or someone baits you into something. Feelings are controlled by context which bring a certain module to the steering wheel. This hijacks your decision making for better or for worse. This is backed up by popular science author Robert Wright, who mentions this in his book:

The human brain is a machine designed by natural selection to respond in pretty reflexive fashion to the sensory input impinging on it. It is designed, in a certain sense, to be controlled by that input. And a key cog in the machinery of control is the feelings that arise in response to the input. If you interact with those feelings… via the natural, reflexive thirst for the pleasant feelings and the natural, reflexive aversion to the unpleasant feelings—you will continue to be controlled by the world around you.

If you are aware of your context and what feelings it might invoke, you can start to ensure that the right module comes about when faced with different scenarios.

The second is to practice meditation so when the time comes you can keep your cool; whether that is faced with the doughnut in the box or the enemy in the street. After all, a big focus of meditation is to be able to experience your feelings with care and clarity, rather than following them reflexively and uncritically. This opens the door for more feelings such as joy, delight, and happiness. Meditation can be as simple as bringing your attention to your deep breaths and dismissing any thoughts that pop into your head.

This way, when it seems like a module hijack might be coming, you can just do a “mini-meditation.” By focusing on your breath for a few moments you can get some mental clarity just at the right time and decide which personality and desire you want to satisfy. Hopefully, that is the ‘good for the greater me’ choice most of the time, but even if you decide to intentionally treat yourself which you definitely should now and again, you can do it without any guilt and enjoy it to the max because it was made with a clear mind.

There are multiple yous. You can get to know them by talking and listening to them, as weird as that may sound. You can probe why I am afraid of this thing or why do I get angry when a specific thing is mentioned. You can ask why and start to understand. And instead of getting irritated by nagging voices, guilt-ridden voices or tempting voices that really want the best for you, you can befriend them, pat them on the head and say ‘thanks, but not today’.