Habits Are About Becoming Someone, Not About Doing Something5 min read

When I was a kid, I wanted to be Andrés Iniesta.

He was one of the best footballers in the world, played in the same position as I did, always came across as a really nice guy and even sold ice cream on the side. What a man. 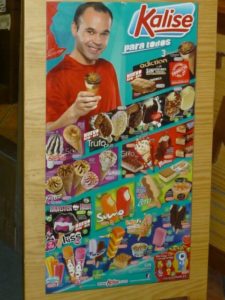 I watched videos about how he played the game. He wasn’t particularly fast or strong, but the way he moved his body and passed the ball meant he didn’t need to be. I looked up what he did to train and tried doing that. I wanted to be a professional footballer, so I made it a habit of training every day to try and make it happen.

Who Do You Want to Be?

Although the football dream never materialised for me, I learnt some extremely important things about habits, identity and making progress. I realised that knowing who you want to be – whether it be something as specific as being a footballer or something more general like being a confident person – is the simplest and most effective place to start.

Deciding who you want to be is essential because it carves up the path to your future. Building habits without knowing where you want to go is like trying to direct a ship with no wheel – it’s hopeless.

Every action you take is a vote for the type of person you wish to become. No single instance will transform your beliefs, but as the votes build up, so does the evidence of your new identity.

Once you have a good idea about the person you want to become – how they act, how they speak, what they take care of, what they let go – you can start to move towards becoming that person by asking yourself what they would do in certain situations.

From James Clear’s book again, he mentions a friend who lost over 100 pounds by asking herself, “What would a healthy person do?” She would keep asking herself this throughout the day whenever a decision needed to be made. To walk or to get a taxi? To cook at home or to get a takeaway? To watch one more Netflix episode or to get an early night? If you answer all of these questions like a healthy person would, it won’t be long until you are one yourself.

One of the most misunderstood aspects of habits and their roles is that many people think that they are means to ends. I will eat healthy every day to lose 5kg. I will go to the gym every day to get bigger biceps. I will get to work early every day to earn that promotion. The problem with habits that are built to achieve external goals is that they quickly stop becoming habits when the goal is achieved. Many athletes let themselves go in retirement for this very reason – they are no longer training for an end goal. The ones who keep exercising aren’t training for goals, they are training for themselves, their identity and even just life itself. Just like David Goggins:

The sole reason I work out like I do isn’t to prepare for and win ultra races. I don’t have an athletic motive at all. It’s to prepare my mind for life itself. Life will always be the most gruelling endurance sport, and when you train hard, get uncomfortable, and callous your mind, you will become a more versatile competitor, trained to find a way forward no matter what. Because there will be times when the shit life throws at you isn’t minor at all. Sometimes life hits you dead in the fucking heart.

Habits are ends in themselves. Think of everything that you do on a regular basis. Your habits are you. Your proneness to worrying, your excellent work ethic, your healthy eating, your tendency to get angry. These things that you repeat become key parts of who you are.

Thankfully, habits can be practised and changed. All it takes is a destination (who you want to become), small steps and the willingness to let your habits guide you towards your new identity.