Have you ever thought about how your watch keeps the time?

You might be wearing one now or at least, have an analogue clock in your house that ticks every second that passes. How does the clock know when to tick? How does it know when what we call ‘one second’ has passed?

These are the types of questions that we rarely ask (here is the answer, if you’re interested). We are surrounded by a world of complex systems but in order for our brains to not explode, we have a built-in system that helps us to dumb everything down to a manageable level. However, if we care enough to zoom in (or sometimes out), we can notice that complex systems are everywhere. Not only that but their very existence has lots to tell us about our place in all of this.

Examples of complex systems in our experience

We only have to begin with ourselves to notice perhaps the universe’s most complex system. When you scratch your head, how do you actually do that? It can be scientifically explained but from a conscious standpoint, we have no idea. The same is true for our digestive systems, our reactions to being shocked, what goes on in our dreams and much more.

Then you can extrapolate out the infinitely complex individual into a group of infinitely complex individuals that you might call society. Society is a complex system that we are all a part of. Presumably, you go to work, you pay your taxes, you interact with people in society, you contribute to society, you use and take things from society. Everyone has their own opinion about whether or not their particular society is ‘good’ or ‘bad’, what should change and what should stay the same. What everyone agrees on though is that lots of people interacting with lots of people is pretty complicated, and sometimes messy.

From there, you can scale up or scale down. Either way, you find more complex systems and what I would consider to be universes in themselves. No matter how short or tall you are, according to scientists’ best estimates you have around 30 trillion to 400 trillion microbes just in your gut. In case you need reminding, that’s up to 400,000,000,000,000 microbes just chilling in your gut right this second. Each microbe doing its own thing so that you can do stuff like go on Facebook or read cool posts like this one. Then you can add the cells in your body, neurons in your brain plus everything else and very quickly you realise that you are literally your own universe.

Speaking of universes, take a look at this picture from the ESO Telescope in Chile. It is capable of putting together a 9 billion pixel image (how? I don’t know. Another complex system) and has captured a picture of some 84 million stars just in our galaxy alone. You can click on the image to zoom and see for yourself what is going on ‘out there’.

The universe is an impossibly complex system and one I don’t think we will ever come to understand. Back on earth, complex systems can be seen everywhere from vacuum cleaners to cars to iPhones. We all kind of know how they work, but none of us really know how they work. It’s too much to think about, and we really need to get on with our day.

We don’t really know much about anything

This one hurts our ego a little but it’s true. Individually, if we stop to think about how food gets on to our plate, how clean water comes from our taps and how boats don’t sink, we don’t really know. For most things though this is fine. As I already mentioned, it would be both time-consuming and an immense waste of time to try to understand every complex system that you use and are a part of.

However, it is a good reminder that we don’t really know much about anything. We always have to work from the position that we are wrong, and that we are trying to be less wrong about things. Just when we think that we know it all, we realise that the Earth is round, that the solar system is heliocentric, not geocentric. We realise that there are subatomic particles and galaxies of our own. Lord Kelvin, one of history’s greatest scientists, announced in 1900 that “there is nothing new to be discovered in physics now. All that remains is more and more precise measurement.” As Tim Urban from Wait But Why fittingly responds to this:

Of course, Kelvin was as wrong as every other arrogant scientist in history—the theory of general relativity and then the theory of quantum mechanics would both topple science on its face over the next century.

Even if we acknowledge today that there will be more twists in the future, we’re probably kind of inclined to think we’ve figured out most of the major things and have a far closer-to-complete picture of reality than the people who thought the Earth was flat. Which, to me, sounds like this: 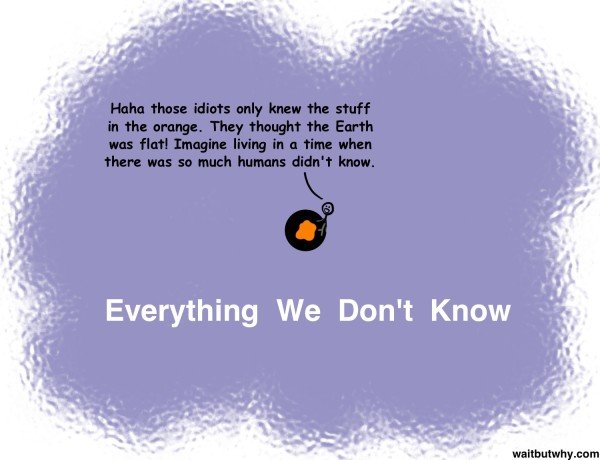 So on a worldwide level as well as an individual level, we probably don’t really know all that much. Which is great, because it is all the more reason to be humble about what you don’t know and sceptical of people who claim that they do know everything about how complex systems like the environment, economics and the universe work.

Things are rarely ever black and white

Complex systems also teach us that things are rarely ever black and white. First, to establish a clear picture we need to know about all of the moving parts of a system and then we need to be able to understand all of those parts as well. Depending on the complexity of the system, this is almost always impossible on our own.

Whether the question is how to treat a certain disease, how to lose 5kg, how the economy works, who is a ‘good’ candidate versus who is a ‘bad’ candidate, all of those conundrums require many more questions before they can even be answered vaguely accurately. Although we have a deep want to understand the world around us, it pays to be wary of people/ideas/institutions that claim to have all of the answers. Life is full of grey areas.

Society is crazily complex and despite this – at least for most of the time in many parts of the world – society seems to somehow work. Yes, I may not know how all of the pieces of a computer fit together that allow me to type this sentence. And I may not know how a virus spreads or how to shoot an Oscar-winning film. But that doesn’t matter, because humans know how to do this. Films, cars, phones are all constructed by specialists in small fields that when added together, create a masterpiece.

As individuals, we all have our own unique interests, skills and specialities but in order for life to function and thrive, we have always required the input and specialities of other people too. Community, ideas and free speech are all intertwined in the journey of progress of human beings. In this rapidly advancing world, we are building systems that are more complex than we have ever seen. The only way we can make them as effective as they possibly can be is by building them together.

This leads us to the final point which reminds us that we always have the chance to be a part of something bigger than ourselves.

Just by recognising who you are and what you are from this post, you realise that you are already a part of a number of complex systems. In fact, you are one.

However, you also have the opportunity to become a part of or create something bigger. Whether that be to build a community of learners and doers, to specialise in one specific area and play your role in a larger system or to simply enjoy being a part of the miracle of life.

Complex systems are all around us if we care to look closely. It’s time to accept our part in them and look to improve them in any way that we can.