Blue Light Blocking Glasses: How They Work and Why They Work9 min read

For quite some time now, I have been struggling with falling asleep.

Once I am asleep there usually aren’t too many issues. Sure, I wake up a few times during the night, maybe toss or turn a little bit. But who doesn’t?

Sleep has always been a fairly big deal for me and it has been getting progressively better. I started to implement some basic tips about getting better sleep, some higher-level sleep hacks for my room and even tried out different sleep positions to help out. Whilst these tips definitely helped my overall sleep quality, the one recurring pain that I still had was falling asleep. No matter what I tried, I would lay awake for half an hour, an hour and sometimes longer before I would eventually drift off.

As I tend to do with these things, I started to a little bit of digging. It didn’t take me long to discover the problems of blue light exposure before bed and how it might have been negatively interfering with my circadian rhythm. In particular, blue light suppresses the production of melatonin (the ‘sleep hormone’), making the body and mind more active than they should be at night.

I realised that I was almost always looking at blue light-emitting screens just before bed. Whether it be my phone, my laptop or the TV. Any and all of these things were messing with my body clock and as a result, my sleep.

So I saw two options: either stop looking at screens altogether for a few hours before bed or find a solution to block the blue-light so I could still use my devices. The first was the preferable option but in let’s-be-real terms, basically impossible. So I picked the second option.

And the solution I found was blue light blocking glasses.

Although I have briefly touched upon how blue light affects sleep, it is worth consulting some of the extensive scientific literature that is already out there.

There is perhaps no better place to begin than with a short article from the National Sleep Foundation:

The reason that blue light is so problematic is that it has a short wavelength that affects levels of melatonin more than any other wavelength does. Light from fluorescent bulbs and LED lights can produce the same effect. Normally, the pineal gland in the brain begins to release melatonin a couple of hours before bedtime, and melatonin reaches its peak in the middle of the night. When people read on a blue light-emitting device (like a tablet, rather than from a printed book) in the evening, it takes them longer to fall asleep; plus, they tend to have less REM sleep (when dreams occur) and wake up feeling sleepier— even after eight hours of shuteye.

The summary of blue light on The Sleep Council is similar:

Blue light is found in many energy efficient light sources and digital devices. It has a short wavelength that stimulates sensors in the eyes to send signals to your brain’s internal clock – tricking it into thinking its daytime. Blue light is beneficial in daylight hours as it boosts mood, reaction times and concentration.

Light is the most powerful cue for shifting the phase or resetting the time of the circadian clock. In an evening, the blue light that emits from devices (including TVs) suppresses the natural production of melatonin – the hormone you need to feel sleepy – and plays havoc with your body’s circadian rhythms making it harder to fall asleep and stay asleep.

In terms of empirical studies, there is quite a significant amount of evidence pointing towards the idea of blue light disrupting melatonin levels and circadian rhythm and in turn, disrupting sleep. If you are interested in how these studies were carried out and their results, you can find their names and links to some of them below:

The Scientific Literature on the Effectiveness of Blue Light Blocking Glasses

Okay, so we have more-or-less established that blue light at night is going to mess your sleep and your health up. But what about this whole blue light blocking glasses thing? How can we be so sure that they are the answer to our blue light problems?

Because blue light blocking glasses are a relatively new invention, the existing literature on their effectiveness is fairly limited. However, there are some studies already out there that look upon them favourably.

In one study titled ‘Amber Lenses to Block Blue Light and Improve Sleep: A Randomized Trial‘. the finding was that:

At the end of the study, the amber lens group experienced significant (p < .001) improvement in sleep quality relative to the control group and positive affect (p = .005). Mood also improved significantly relative to controls.

Positive conclusions have been found in other studies too, including ‘Protective effect of blue-light shield eyewear for adults against light pollution from self-luminous devices used at night‘. Although the sample size was admittedly small, the study found that:

Overnight melatonin secretion was significantly higher after using the blue-light shield (P < 0.05) than with the control eyewear. Sleep efficacy and sleep latency were significantly superior for wearers of the blue-light shield (P < 0.05 for both), and this group reported greater sleepiness during portable device use compared to those using the control eyewear.

the sleep onset time measured by actigraph was advanced by 132 min after the treatment (p = 0.034). These data suggest that wearing amber lenses may be an effective and safe intervention for the patients with DSPD [Delayed Sleep Phase Disorder]. These findings also warrant replication in a larger patient cohort with controlled observations.

Of course, it is worth recognising that with any studies on a relatively new concept such as blue light blocking glasses, the trials aren’t perfect. Sample sizes are usually quite small, placebo effects can play a factor and distinguishing between correlation and causation can be tough.

However, the early signs seem to indicate that there are many benefits of wearing blue light blocking glasses at night and how they can significantly assist your sleep.

My Own Experience – The Glasses I Wear

After investigating all of the evidence on blue light and the corresponding ‘anti-blue light’ glasses, I decided to give them a shot.

I did a bit of research on the different styles and types. There were some trendy looking ones with clear lenses which looked cool but didn’t block as much blue light as the amber lenses do. There were some seriously hideous-looking amber lensed ones too. 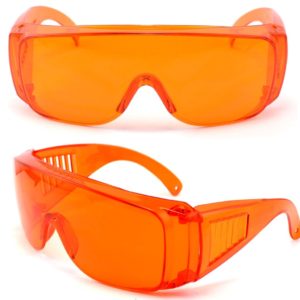 Seriously. They weren’t even that cheaper either.

Eventually, I decided on a pair of ‘Swannies’ from Swanwick Sleep. I bought my particular pair from the Swannies selection on Amazon.

However, if you live in the U.S.(which I don’t), you can also purchase directly from the Swanwick Sleep website. The pair I bought are called ‘Classic Night Swannies‘ on their site.

This is everything that came with my purchase including a sleek case, a Thank You note with extra sleep tips, a cloth for cleaning, a storage sock and of course, the little beauties themselves. 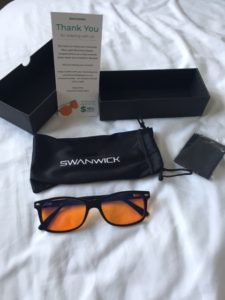 In case you missed the cheesy and awkward-looking Instagram post a few weeks back, here are my Swannies in action. 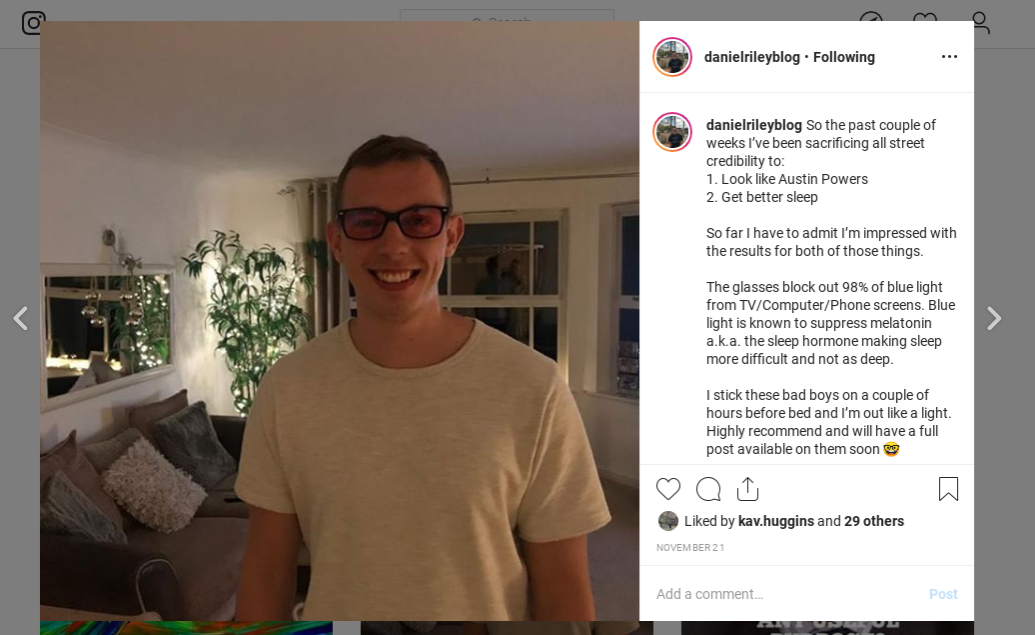 My Own Experience – The Effects

So now you know what the literature says and what exact pair I have, but what about my own experience? Have I actually found these useful and slept better since wearing them? I hate to be that guy, but I am going to give you the boring, predictable but truthful ‘Yes, I am glad that I bought them’.

I have noticed that I lay awake for a shorter period of time than I used to when I hit the pillow. I also tend to wake up feeling more energised, presumably from getting a better quality of sleep too (although I don’t possess any very reliable sleep trackers to confirm this).

These are all positive effects that I definitely feel. However, since I knew about all of the literature before buying them, it’s possible that placebo is playing a part here. I expect to get better sleep when wearing the glasses, so I get better sleep. Or maybe the science is doing all the work. Who knows? Who cares? I feel like I am getting better sleep and at the end of the day, that is probably all that matters.

One of the most tangible benefits that I totally didn’t expect was how relaxed my eyes feel when I’m wearing them and when I’ve just taken them off before sleep. It is one of those scenarios where you don’t realise how strained your eyes always are until you’ve felt them not be strained. Strained becomes the baseline and you don’t even notice until you get a pair of glasses like these and realise what you’ve been missing. I’m hoping that less strain also means longer-term eye health, as they are getting significant rest in the evenings.

I love my blue light blocking glasses and see them as a short and long-term investment in better sleep, more energised days and eye health. The science behind them is compelling and so far, my experience with them has been extremely positive.

After knowing all of these things, I feel it is harder to justify not getting something as beneficial as glasses like these, than it is to rationalise your way into thinking you don’t need them. The science is there and growing, you just need to try them out for yourself.

Again, you can find them HERE on Amazon or HERE at the Swanwick Sleep’s website. Both of these sources were kind enough to let me become affiliates for their products after my very satisfying purchases with them.