It’s easy to get caught up in the negativity that surrounds modern media. Whether that’s turning on the news in the evening or having a scroll through a social media channel, you are bound to find someone or something that either directly or indirectly screams that the world is a mess and that we are heading for certain doom. But is the world really as bad as people like to think? Here are some world facts that may help you look at things in a different light…

“Just 20 years ago, 29 per cent of the world population lived in extreme poverty. Now that number is 9 per cent. Today almost everybody has escaped hell”

Here are some quotes from the article on HumanProgress.org:

The speed of poverty alleviation in the last 25 years has been historically unprecedented. Not only is the proportion of people in poverty at a record low, but, in spite of adding 2 billion to the planet’s population, the overall number of people living in extreme poverty has fallen too.

Since its economic liberalization reforms in 1991, India’s average income has increased by 7.5 percent per year. That means that average income has more than tripled over the last quarter century. As wealth increased, the poverty rate in India declined by almost 24 percent. But most significantly, for the Dalits – the poorest and lowest caste in Indian society – the poverty rate during this period declined even faster, by 31 percent. That means that in the nation that has by far the largest number of people in extreme poverty, it is the people at the very bottom of the social strata who are getting richer faster. 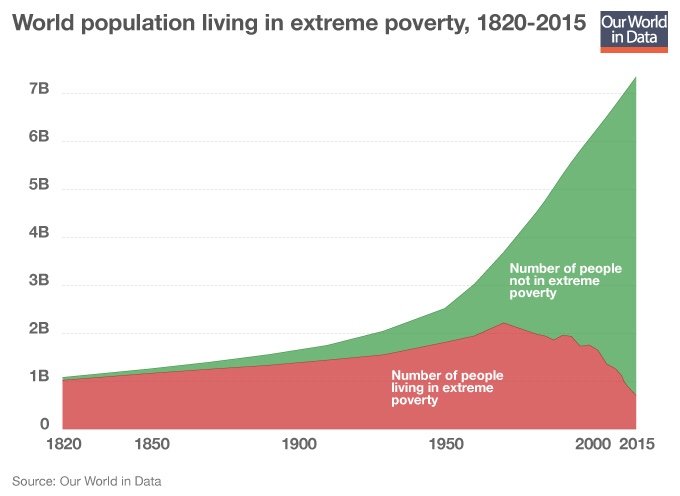 Following on from the previous statistics about global extreme poverty is the fact that 137,000+ are escaping extreme poverty every day. People are considered to live in ‘extreme poverty’ if they have to get by on less than 1.90 international-dollars per day, which is a currency that has been adjusted for price differences between countries and inflation.

That equates to roughly $57 a month that covers food, healthcare, shelter, everything.

In 1990, 1.86 billion people were living below the poverty line which equated to more than every third person on earth. That is crazy. By the time the study was published in 2015, the number was at 706 million. More or less every tenth person in the world.

That sort of fall in a 15 year period is nothing short of miraculous and certainly provides hope for completely eradicating extreme poverty in our lifetimes.

These are certainly some very encouraging statistics that indicate that while our world and all of its complex, intricate systems aren’t perfect, we certainly seem to head in the right direction. 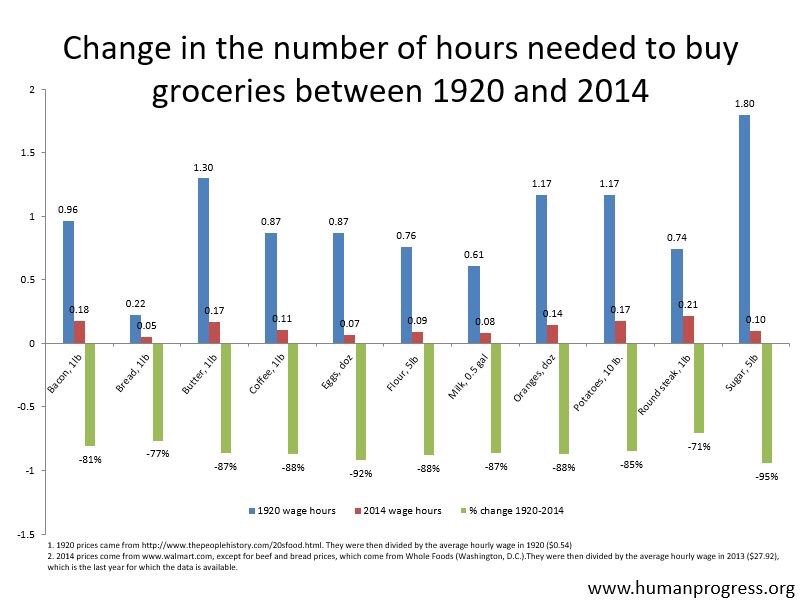 Another graph from Human Progress looks at how the relationship between number of hours worked and purchasing power has changed. More specifically, how in 2014 you could work significantly less to be able to afford the essentials than in 1920. The green bars in the graph show this percentage decrease in hours needed to work for each type of consumable. Even though this study is based in the U.S., the same results are evident in many countries.

This fact speaks for itself. The child mortality rate across Africa is lower than that of Europe in 1950. I have grandparents that were in their teens in 1950, many of you will have parents who were born before 1950 and some of you may have even been around then! It is particularly hard to believe that Africa is catching up at such a rate due to the amount and type of media coverage you see of the vast continent. Despite many of the countries having a long way to go, this is a hugely encouraging statistic which is already seeing a longer and better quality life for those who are born. It is a little bit difficult to deal with this statistic as it still reflects the fact that 6 million children a year are dying before their 5th birthday. That equates to around 11 every minute and is still extremely tough to fathom.

However, this considerable fall in the last 60 or so years is extremely encouraging that it can be taken further. The 60 year period has seen a reduction to 3.5 times the level of what it was in 1960. The world is a lot better now for children, but there is still a hell of a lot of work to do.

You have more ‘servants’ than a King

To finish, here is an extract from the book The Rational Optimist (affiliate link) that particularly resonated with me:

… on a whim to choose between scores of nearby bistros, or Italian, Chinese, Japanese or Indian restaurants, in each of which a team of skilled chefs is waiting to serve your family at less than an hour’s notice. Think of this: never before this generation has the average person been able to afford to have somebody else prepare his meals.

You employ no tailor, but you can browse the internet and instantly order from an almost infinite range of excellent, affordable clothes of cotton, silk, linen, wool and nylon made up for you in factories all over Asia. You have no carriage, but you can buy a ticket which will summon the services of a skilled pilot of a budget airline to fly you to one of hundreds of destinations that [King] Louis never dreamed of seeing. You have no woodcutters to bring you logs for the fire, but the operators of gas rigs in Russia are clamouring to bring you clean central heating…

…My point is that you have far, far more than 498 servants at your immediate beck and call.